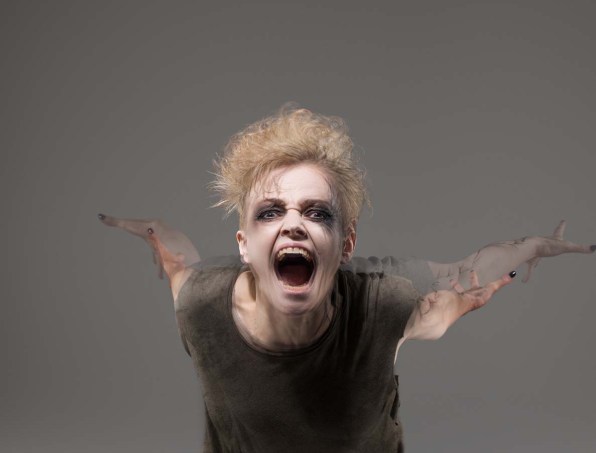 What is it about The Skriker? It’s a few weeks since I saw Sarah Frankcom’s (now closed) version at the Manchester Royal Exchange, but it’s still resonating. The weekend before I saw it, I read Susannah Clapp’s review, which started with how ‘extraordinary prescient’ it was. I did kind-of wonder how this phantasmagorical, twenty-year-old play, full of classic Churchill allusions to female identity (Vinegar Tom, Top Girls etc.), which was written in the aftermath of Thatcherism, could be extraordinarily prescient. However, I do think it was – and I really loved it – but I’m not sure that the production was entirely responsible for this prescience. And, did Clapp mean that The Skriker was prescient then, or now? Was Churchill saying something in the early nineties that has proven prescient now we’re in 2015? Or is Frankcom, in 2015, using the play to say something prescient about the future?

First, to the past: I am a home girl of the Royal Exchange. It’s where I ate my foil wrapped sarnies when I was four. I’ve been going to St Ann’s Square since before the IRA bomb, and it’s still the building I like the most. It took me until my teens, when I’d visited other theatres, to finally click – not all stages were in the round and it is possible to have a total blackout. Still, whatever biased impression of theatre I received, the Royal Exchange is not a bad training ground. So, when I went the other day, I knew instinctively that something was different (prescient?). There were trees inside the building (Royal Wedding style), a full blackout was on the cards, and the lowest level of seating had been gutted by Lizzie Clachan’s pretty damn hot design. The audience on the ground tier sat at tables, which became sites of banqueting, roads, and thrust stages, as the play moved between its fantastic and natural environments. The lighting was all industrial gothic. At times, the stage opened out to reveal some tableaux – like little picture book horrors. It was conceptually grandiose.

And Peake was brilliant. Her claim on the language of the play was total and she moved through its tongue-twisters as if they were her patois. The plot is sparse, wedged behind Peake’s poetry. The Skriker’s repeated attempts to lure Lily (Juma Sharkah) and Josie (Laura Elsworthy) to her underworld are realised with all the allure and danger of folklore, but the rationale behind the Skriker’s actions carries the acerbic bite of these women’s actual material conditions; as ‘damaged’ (Churchill’s word) single-mother figures, clearly representing a certain social stratum too, what would the Skriker want with them?

Curiously, to me, the prescience of the play is allotted to the Skriker’s threats of natural damage: volcanoes, apocalypse, and the like, and the programme tells us the play’s warning is a timely and prophetic allusion to the damage we/capitalism is unleashing on the natural world. I like this reading. I’ve read the Naomi Klein book that the programme quotes at length. But I do think that there was a deeper prescience to this whole project in relation to what might happen up North.

George Osborne has renewed his vow to create a ‘Northern Powerhouse’ and Manchester seems to be very central to that design. There’s now Home – the new cultural venue, and The Factory coming up round the corner, and, with projects like The Skriker, and people like Peake, the Royal Exchange itself is helping to generate, I think, a new Richard Florida-esque interest in Manchester. From the outside, it feels like it’s being engineered into becoming some kind of hub supposedly to pull the creative class out of Euston and into Piccadilly. Peake herself is uneasy with the language of this transition; she worries that the city might be lost behind all this discourse on progress. But, with projects like hers and Frankcom’s, I think that something is changing back home, and, just as we can’t predict the effects of the Skriker’s actions, we can’t necessarily predict the ecological, sociological and material impact of George Osborne’s political designs.